Thousand Islands National Park
Located on the Canadian side of the St. Lawrence River, Thousand Islands National Park (NP) was the first Canadian national park established east of the Rocky Mountains, in 1904. Today, the park spans is the third smallest Canadian national park and consists of 26 islands, 80 inlets and shoals, three mainland properties and a visitor centre in Mallorytown, Ontario. More than 70,000 people visit the park each year; more than 400,000 experience the park's islands via tour-boat travelling, according to the park's 2010 management plan.

Ecologically, Thousand Islands NP is situated at the intersection of two great landscape corridors: the Frontenac Arch (linking the Canadian Shield to the Adirondack Mountains) and the St. Lawrence River Valley (connecting the Great Lakes to the Atlantic Ocean). As such, the park boasts high biodiversity and is home to many species at risk. 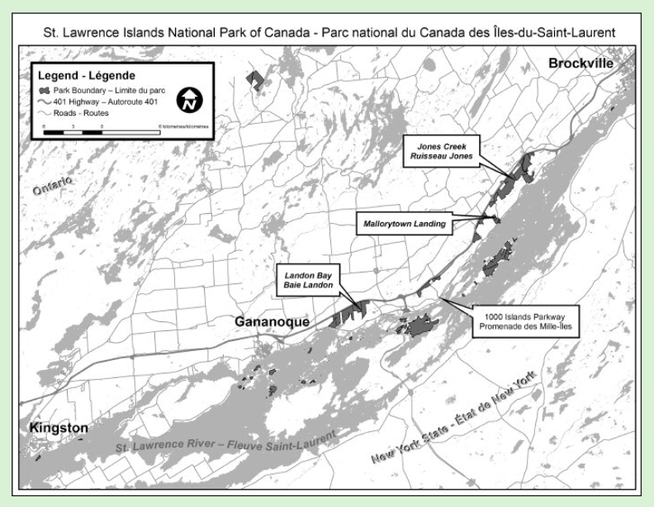 UNESCO Biosphere Reserves
At the centre of A2A is the Frontenac Arch Biosphere, which was designated in 2001 and extends roughly 2,700 sq km (1,700 miles) in southeastern Ontario. The area includes the islands and islets of the St. Lawrence River — important stepping stones for the migration of plants and animals. This land bridge of the Frontenac Arch is crucial for connecting the Algonquin Highlands, in Ontario, to the Adirondack Mountains, in New York State. According to UNESCO, "The Frontenac Arch is a unique chorus of people, landscapes and living creatures."

In the U.S., the Champlain-Adirondack Biosphere Reserve, which includes Adirondack Park, was designated in 1989. The reserve straddles the border of north-central New York and northwestern Vermont. Lake Champlain, the sixth largest lake in the United States, and the Adirondack and Green Mountains are the central features of the biosphere reserve. According to UNESCO, the primary goal of the Champlain-Adirondack Biosphere Reserve is to use education, research, and demonstration projects to encourage social and economic vitality and to preserve and improve the environmental health of the region.